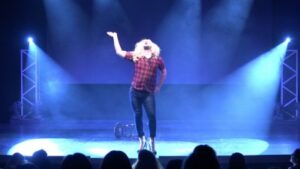 $13,000 was raised for the Royal LePage Shelter Foundation at the 4th annual Lip Sync Battle, hosted by Amy Layton, an agent with Royal LePage NRC Realty in Niagara Falls, Ontario. The event was held on November 10, 2019.
More than 200 attendees of all ages filled the Greg Frewin Theatre to cheer on contestants from the community who battled against one another in two rounds of lip syncing performances.
Brandon Stafford, a local actor, was crowned the winner – the first man to do so in four years – after performing as C+C Music Factory and Shania Twain. Another fan favorite performance was a crew from the Niagara Falls Fire Department lip syncing to a Backstreet Boys medley.
“The ongoing success of this event shows me that our community truly cares for those who are vulnerable and in need of a helping hand,” said Layton. “It has also taught me the power of coming together to make a difference. If you take a deep breath and put your ideas out there, others will join you in your quest to take care of one other.”
Funds were raised by ticket sales, 50/50, and a designer bag draw courtesy of The Purse Project Niagara. 100 per cent of proceeds were directed to Women’s Place of South Niagara, an organization providing safe shelter and counselling to women and children experiencing domestic violence.
Since 2016, the event has now raised over $26,000. 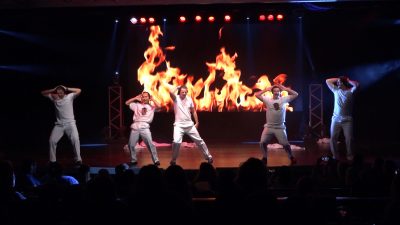