Don Inglehart and Fred Losani have transferred ownership of their successful Stoney Creek brokerage to Nicolas von Bredow (Nic), Nicholas Kazan (Nick), and John Iannuzzi, who remains as one of the original owners. Don will stay on as a selling broker. 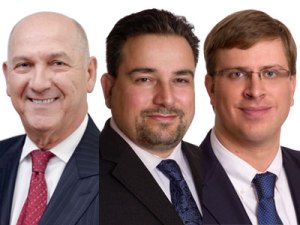 As an owner, John Iannuzzi will build upon his insights serving as president and broker of record at Royal LePage Macro Realty since 2015 and Macro Realty since 2004. As co-owners, Nic and Nick will serve as managing partners. All three owners, with a combined experience of over 80 years, have enjoyed note-worthy careers as award-winning realtors and have sat on numerous committees within organized real estate.

With a bustling team of 82 sales representatives, Royal LePage Macro will focus on new technology, training and processes to support their sales team. The new owners will draw on diverse experiences to grow the company, while leveraging the latest technology tools from Royal LePage. Brand recognition and integrity and the strong Royal LePage referral network will contribute to the company’s ongoing success.

Royal LePage Macro Realty services the Greater Hamilton area, West Niagara and surrounding markets. They have a primary focus on the residential resale market, which includes new home sales representing some of the largest and highest-ranked builders in the area. A commercial division focusing on investment and land sales is also part of Royal LePage Macro’s mix.