Owning a home is a bargain, and carrying a mortgage is cheaper than ever, or at least cheaper than it was twenty-five years ago. Don’t believe it? The numbers, which come from Statistics Canada’s Consumer Price Index (CPI), actually tell the story quite succinctly.

The CPI is the basket of goods and services surveyed by Statistics Canada in order to get a handle on the cost of living in Canada.  The year-over-year change in the CPI gives us the ‘inflation rate’, which is closely viewed by the Bank of Canada and others to understand whether price pressures are building.  The price of homes, of course, is an important part of that.

To get some perspective around how quickly home prices have been rising, we looked at CPI data back to 1990, ‘indexing’ the value of each month to January of that year.[1] What we found is that while the costs of homeownership increased over that period, they have actually increased less than the overall cost of living.  (All references to costs are for the average expenditures by a Canadian household during a given time period). Between 1990 and June of 2015 (the last month for which data is available) the cost of home ownership grew by 55 per cent.  In contrast, the overall cost of living was up by 66 per cent.  The city you live in will skew the homeownership number up or down, but the theme holds: owning a home has been relatively affordable over the decades. Transportation costs (up 90 per cent) and food costs (up 74 per cent) grew more quickly than the overall index.  The real bargain was clothing prices, which (influenced by relatively cheap imports from countries like China) were up by only 10 per cent over the period. 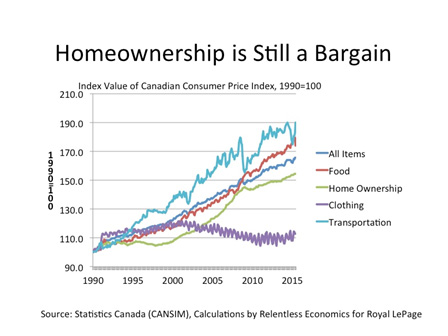 What is really interesting is looking at the way that the components of home ownership costs have changed over time. The overall homeownership index fell from 1990 through 2000 (in tandem with interest rates), rose in the years following until the start of the 2008 recession, and increased at a much slower pace since.  Mortgage interest costs (which reflect the size of the a household’s mortgage, as well as the interest rate paid on it), however, have followed a much more dramatic path. Although home prices have increased significantly in many markets, typical mortgage interest costs in fact declined by over 7 per cent between June of 2010 and June of 2015, and by 1 per cent since January 1990. That’s a powerful statistic: it means that despite sharp increases in home prices in many markets, in Canada as a whole it is cheaper to carry a mortgage now than it was in 1990.

Where costs have skyrocketed is in the category of property taxes.  Although they plateaued for a while between 2000 and 2005, in the years since they have climbed precipitously. In total, between 1990 and June of 2015, the property cost portion of home ownership has increased by an incredible 210 per cent.

A lot of attention is paid these days to the rising costs of homeownership, with good reason. In many larger markets, it can be difficult for some would-be buyers to enter the market, and difficult to meet the continuing costs of owning a home.  Then again, sometimes the picture gets blurred by what happens in a couple of major markets over short time periods. Given the above, the big picture for Canada is one of reasonably manageable home ownership costs – with the exception of those imposed in the form of taxes.

[1] To index a number you typically compare it to a base value which is set to 100. In this case, we set January 1990 to 100 and compared all other months of data to that base.