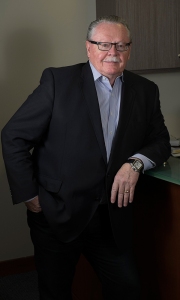 Michael Bertrand is the new broker/owner of Royal LePage Westside.

Michael has built a successful real estate business through professionalism, community services and involvement within organized real estate. Following an education in Economics and Commerce from the University of British Columbia, Michael began his real estate career in 1973. Since that time, he has amassed significant expertise in land assembly, land development, construction and property management. He is a multiple award winner including recipient of the Medallion Club Award from the Real Estate Board of Greater Vancouver, as well as earning many top sales and top producer awards during his distinguished career.  His business philosophy is rooted in a commitment to creating a positive culture within his office. Michael is pleased to fly the Royal LePage banner and intends to leverage the company’s strong brand recognition as a truly Canadian company.

Barbara Bell-Olsen is an experienced Realtor® with more than 36 years in the business, 15 years of which have been with Royal LePage Westside. In 2014, Barbara authored her first book Stay Out of Real Estate Jail – Your Lifeline to Real Estate, where she shares a nuts-and-bolts, step by step look at the real estate industry, offering time-saving concepts, forms, checklists, sample letters and legal documents.